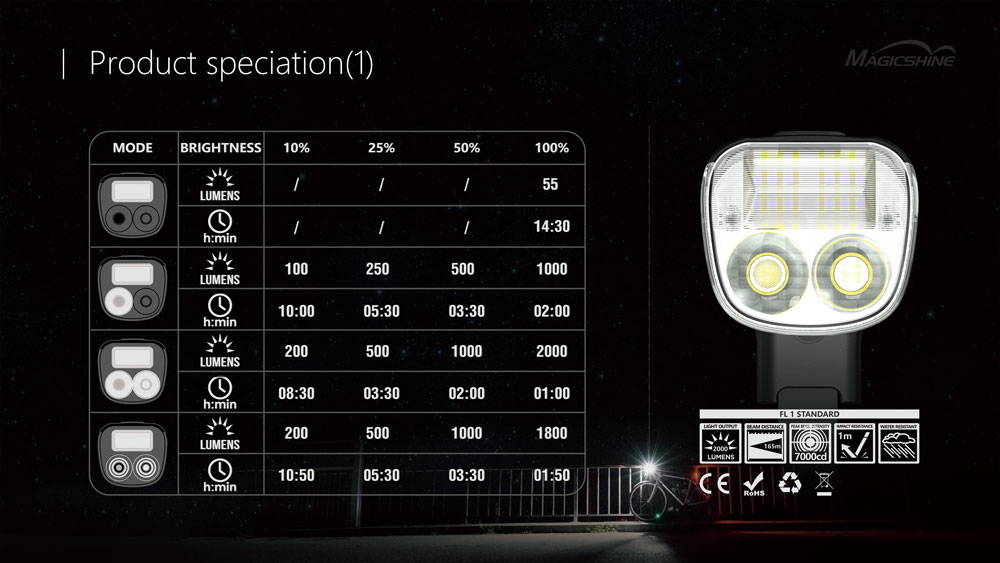 thesweetcyclists.com/magicshine-allty2000
It wasn’t long ago that commuter bicycle headlights were basic low lumen lights with bulky mounts. As technology has improved, bicycle lights have gotten better with the increased features, more compact form factors, and higher output. The Magicshine Allty 2000 headlight illustrates just how far we’ve come in terms of advancement. Not only does the Allty 2000 incorporate two Cree XM-L2 V60 LEDs, but there is an additional low-output LED designed to be used as a day-time-running-light (DRL). With a retail price of $149.99, the Allty 2000 is aimed at cyclists or commuters who want a high-powered all-in-one headlight. The modern exterior design is complemented by the three light element design and a built-in Garmin style quarter turn mount. This makes the Allty 2000 a top choice for those running out-in-front style Garmin mounts, as you don’t need an additional adapter to mount the light. The light is also rated at IPX5 and is powered by two 18650 Li-ion batteries with a micro USB charging port. The Li-ion batteries uses a cartridge style encasing for 3500 mAh of power and runtimes that range from 14.5 hours for DRL only down to 1 hour for the full 2000 lumen output. Let’s take a detailed look at the Allty 2000. Category Bicycle Head Light Rating 9.2/10 Retail Price $149.99 Likes + OLED Display Screen + DRL and Dual Cree LEDs + Built-in Quarter turn Garmin mount Dislikes – Cartridge Battery – Too many Output modes – Limited run-time on higher settings Where to Buy (US) Magicshine The Magicshine Allty 2000 is an impressive feature packed all-in-one headlight. Incorporating a DRL light, built-in Garmin style mount and an OLED screen the Allty 2000 is substantial improvement over previous commuter lights.